Little Kingdoms started off by filling the basement with ambient sounds of guitar layered with some great solos by their front man. Keep an eye on this band as they progress in their songwriting.

I Kill Giants went as hard as they could the entire set. The guitar tapping, drum filling, and passionate yelling did not stop until their final song was over. Their set consisted of several songs off their recently released full length, and almost all of their older EPs. They played quickly and with meaning, jumping and running around the small space, as well as encouraging the entire crowd to sing-along. These guys know how to play and write catchy songs while having as much fun as they can while doing it.

Old Gray poured their heart and soul in to their music, and this performance. Their new album is fantastic, and that came through at this show. The lyrics are revealing, the music is sad and angry and goes perfectly with the emotions they describe. The intensity of their set just speaks of how much feeling these guys put into their music. 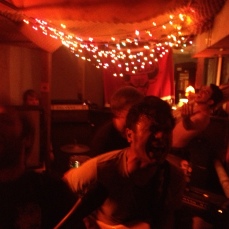 One thought on “Old Gray, I Kill Giants, and Little Kingdoms at the Michael Jordan House, West Philadelphia. June 2, 2013”