Philadelphia locals; Girls Dressed as Girls, The Mighty Paradocs, and Moor Mother Goddess are going on tour this month, with shows as far away as Texas. To prepare, they have started an Indiegogo campaign to raise money for the expenses that come along with a DIY tour.  They have perks for donations, so make sure to head over and help them out, and check them out if they are in your area or at one of their shows in Philadelphia!

Moor Mother Goddess is a solo project by Camae Defstar, also a member of the two touring bands, in which she raps and speaks poetry over some very interesting beats and samples. These sounds are melded to form a kind of rap that is unique to the DIY community. Each song sounds different, in regards to delivery and beat, which is hard to come by with rap. Some of the music is more ambient with out-of-this-world sounds, such as on “Lost Stars,” while others are spoken word with deep poetry, such as “Try to Remember.” With politically charged and emotional lyrics, Moor Mother Goddess creates a type of rap that is one of a kind.

The Mighty Paradocs are a punk rock band that kicks ass. After listening to a recording of their live set, as well as their studio recordings, it is evident that their energy comes through wholeheartedly in their live performance. With songs like “Pissy Politician” and “CopSpit,” they display a rebellious mindset which is matched by raw singing, and quickly raging guitar and bass. The singers have the ability to belt it out in the fast, rough way that is typical of punk music, while also singing cleaner vocals that sound awesome over  trudging guitar and bass. The guitar also gets high pitched and loud at parts, and some songs slow down in an epic way, with heavy guitar and drums. This band has a very diverse sound, with songs like “Burnin Miss USA” that remind me of Rage Against the Machine, and others like “40oz of Hurricane” that are fast, straight punk. Some songs take inspiration from reggae, slowing down and having more of a rap style to them. This band rocks. Listen to some studio recordings here and a live album here.

Girls Dressed as Girls is a chiller punk band that utilizes lo-fi sound to create music that is great to just jam to. “It’s In The Air,” starts out quiet and but explodes with yelling, “You never loved me, you just wanted me for show.” The song proceeds into some absolute shredding on guitar, while keeping the unorthodox punk sound going.  In “You’re Right” the band presents straightforward pop punk that is reminiscent of Sleater-Kinney, with vocal harmonies between raw and clean singing that gives the music a cool sound. This band is definitely worth a listen, being more pop punk and still possessing their own style makes them a interesting. Listen to the tunes here. 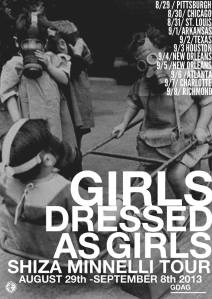